Data on the use of s39D IMCA's in the first year shows poor awareness and underuse.

As I've discussed several times before on this blog, the snappily titled s39D IMCA's are an absolutely vital  part of the deprivation of liberty safeguards (DoLS).  This is because they are, theoretically, the only person involved in the process who a) understand the DoLS; b) doesn't have a vested interest in the outcome.  Their role is the support the detainee (P) and their unpaid representative (R).  However, in July 2010 the Mental Health Alliance reported that:

...IMCAs are far more likely than family representatives to recognise when legal processes are not being properly followed, and to challenge them, but IMCA providers reported that requests for 39D IMCAs were very rare, and it was suggested that they were being appointed in less than five per cent of cases where relatives or friends were acting as representatives, the usual practice simply being to inform the representative in their appointment letter that the service was available  if they requested it. Cost (which the Government’s impact assessment did not specifically provide for) may well be a factor, and it was suggested also that the volume of paperwork and notifications accompanying an authorisation was a disincentive for supervisory bodies to undertake any additional tasks which were not an absolute requirement. However, the implication is that the requirements of Section 39D are generally being disregarded and that the vast majority of family representatives are receiving no support in grappling with an opaque and impenetrable system.

I tried to get some hard data to back up the assertion that s39D IMCA's were only being appointed in 5% of cases where people had an unpaid representative.  For various reasons I wasn't completely happy with the data I collected directly from local authorities; one reason was that several responses suggested some local authorities hadn't even heard of s39D IMCA's.  This despite the fact it's their duty to refer P or R to one if they think P and R need support understanding or exercising their rights.  In some ways it's not that surprising that supervisory bodies didn't know about the s39D IMCA role... because they're not mentioned in the DoLS code of practice!!!  [Edit: 02/02/2012 Roger just pointed out that the role is mentioned in paragraphs 7.37-7.41 of the code, but it doesn't mention the relevant bit of the statute, so the name '39D' wouldn't be clear].  So they'd only know about them if they'd been specifically told, or looked at the schedules.

In the last IMCA report, the DH produced the following chart: 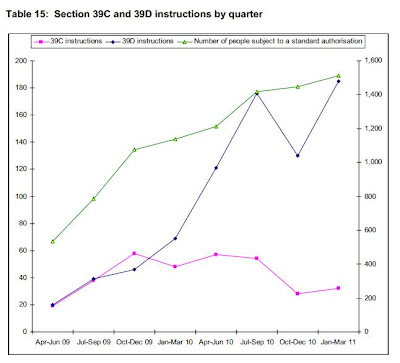 'The actual percentage will be lower because more that one 39D inst ruction can be made during a standard authorisation, and some of these 612 instructions will be in relation to authorisations granted in the previous year.' (p25)

There is roughly a tenfold difference between the scales for advocacy referrals and authorisations:


'...in the fourth year there were only six hundred and twelve 39D IMCA instructions compared to 4951 standard authorisations being gr anted. This means that at most 12% of people subject to these new authorisations benefited from the support of a 39D IMCA.' (p25)

I wanted to explore the variation in use of the IMCA service between different local authorities.  In February 2011 I wrote to the Department of Health (DH) asking them to provide me with detailed data on the number of people detained under the deprivation of liberty safeguards (DOLS) and  referred to advocacy services under s39A, s39C and s39D Mental Capacity Act (MCA).   I won't bore you with ins and outs of why this request took a year to come through, but the DH kindly shared the data with me yesterday.  It's quite interesting on several grounds, not least of which the "health warning"  they supplied with it:

The data by category for 2009/10 were not published due to feedback from advocates, care homes and local authorities, which showed that there was considerable confusion over the understanding and recording of the different categories of DoLS in the first year. The decision was made at the time that the numbers inputted under the three categories were unreliable and unusable. However, this review has highlighted that, despite its erroneous nature, there are no legal grounds for withholding the information.

I think that's a research finding in itself: such  was the level of confusion on the ground about what different kinds of IMCA's for DoLS, the data collected on this was unuseable.  Out of interest, I have plotted the following charts anyway showing the number of s39D IMCA's against the number of authorisations overall from the DH's data, but please bear in mind their health warning: 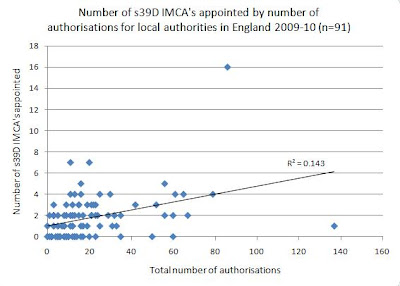 So, to recap, both my graph and the DH graph suffer from data quality issues because they were based on problematic data.  The DH graph, as they acknowledge, underestimates the problem because they base it on the number of people detained rather than the number of authorisations.  Conversely, my graph is based on the number of authorisations, rather than the quarterly 'snapshot' of the number of people detained, and because some people may be subject to more than one authorisation, but might still have benefitted from a s39D referral, my graph will overestimate the problem.  On the basis of the official data alone, it's impossible to extract the figure we really want: how many people who were detained under the DoLS did, and did not, benefit from a s39D IMCA's support when they were legally entitled to one.  However, looking at these data, we can reasonably conclude three things:
Fortunately, the DH's chart shows that use of s39D IMCA's is increasing.  It will be interesting to see whether there is a 'spike' in s39D IMCA referrals for summer 2011, as we saw in DoLS appeals, following the publicity around the Neary ruling.
Posted by Lucy Series at 14:37