The Health Select Committee has published a report of its post-legislative scrutiny of the Mental Health Act 2007 (MHA).  I've written about the MHA bits for the UK Human Rights Blog, so I won't repeat them here, but what the Committee had to say about the deprivation of liberty safeguards (DoLS) was striking.  I grumbled last year about the Department of Health's rather over-optimistic appraisal of the success of the DoLS.  It seems that the Health Select Committee did not share their views.

The Commitee noted the 'extreme' variation in application of the DoLS, and heard evidence that providers did not 'know when they were exceeding the powers it gave them and would therefore need to apply for a DOLS authorisation, or how the MCA could be used appropriately, sometimes negating a need for DOLS'.  Their implementation was marked by confusion and resistance, and the Committee felt there was an urgent need for reform.  Clinicians regretted the loss of the DoLS guidance group which the Department of Health used to run, and called for more authoritative guidance.

The Committee found the evidence it received on the application of the DoLS 'profoundly depressing and complacent', commenting:

People who suffer from lack of mental capacity are among the most vulnerable members of society and they are entitled to expect that their rights are properly and effectively protected. The fact is that despite fine words in legislation they are currently widely exposed to abuse because the controls which are supposed to protect them are woefully inadequate.

The Committee recommended that the Department of Health conduct 'an urgent review of the implementation of DoLS', to be presented to Parliament within 12 months, 'together with an action plan to deliver early improvement.'  It will be very interesting to see what they produce.
Posted by Lucy Series at 10:12 No comments:

...the Cabinet well-understood that the proposed policy sought to balance the Council's policy objectives of supporting disabled people to live full and independent lives within their local communities, and its obligations in relation to public expenditure; the policy sacrificing choice and control by service users to some degree, in favour of reducing public expenditure. That was its very purpose. [52]

Those of you worrying about Worcestershire County Council’s Maximum Expenditure Policy, which sought to cap the value that would be spent on a package of care at the cost of a residential care placement, will be disappointed to learn that a judicial review of the lawfulness of the consultation process for adopting this policy, has failed. This is disappointing for the claimant, who was motivated by concern that her son (who she said needed 24 hour support) would be left with residential care as the only viable support option, for others in Worcesteshire with similar concerns, and for those concerned that other local authorities may now be motivated to adopt a similar policy.  I have a thousand things to do this week so I can’t spend as much time blogging about this as I would like to, but I just wanted to observe a couple of things about the judgment.

This is a unique opportunity to tell Parliament about your views on the Mental Capacity Act, the deprivation of liberty safeguards and the Court of Protection.  The Committee have produced a call for evidence, but if answering that list of questions sounds a bit daunting, don't worry.  Those fabulous folk at the British Institute of Human Rights have produced a guide to the Committee.  The guide will tell you all about why the Committee was set up, and it will give you advice on how to give your views to the Committee.

If you want to talk about your experiences of the Court of Protection it is very important that you know that ordinarily you cannot publish information about the proceedings (for example, on Facebook or other websites, or in other media).  However, special rules apply for Parliamentary Committees so you can still write to them.

If you know somebody with a story to tell about the Mental Capacity Act, who might struggle to do so without help, think about how you can help them to make their voice heard.  This guide from the British Institute for Human Rights can help you to do that.
Posted by Lucy Series at 17:52 No comments:

The Court of Protection case about the Iranian doctor on a hunger strike because the UK Border Agency had confiscated his passport, which popped up in the news some time ago, has meandered it’s way onto BAILII. The case is extremely interesting for its treatment of mental capacity and cultural differences, but I’m not going to talk about that today (for me, it did bring to mind the play Blue/Orange, by Joe Penhall, where the audience is left wondering in places how implausible the ‘delusions’ of a psychiatric patient that he is the son of Idi Amin actually are). What I want to talk about is the discovery of... (drum roll please) a new Bournewood Gap

Those of you not obsessed with the twists and turns of ‘eligibility’ for the deprivation of liberty safeguards, which is a particular issue arising from the interaction of the Mental Health Act 1983 (MHA) and the Mental Capacity Act 2005 (MCA), I suggest you tune out now. Those of you hoping this will have some fascinating CRPD-related insights, apologies, this discussion will remain within the parallel universe of trying to make sense of conflicting obligations in domestic legislation, neither of which are likely to be CRPD compliant (or even ECHR compliant, given the way this case turned out).  But eligibility geeks - let’s get stuck in. I’m sort of assuming readers are familiar with the case GJ v The Foundation Trust (2009) which concerns when a person who is not detained under the MHA but who is in hospital is ‘eligible’ for detention under the DoLS. Here’s my recent effort to schematise the judgment: 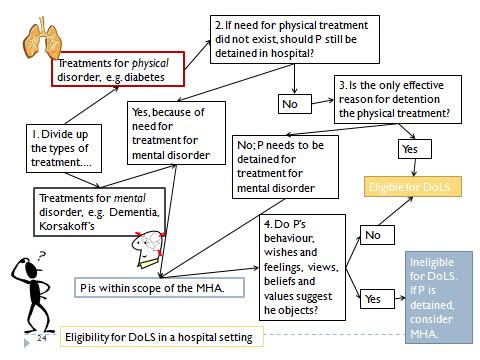 When I am stuck on questions of eligibility, I turn to Richard Jones's guides to the MHA and MCA, and since I can't improve upon perfection I suggest you do the same!  But in fact, this case was slightly different to the GJ situation, and perhaps even more complicated...  The unfortunate judge having to deal with the mess left by Parliament on this occasion was Mr Justice Baker.