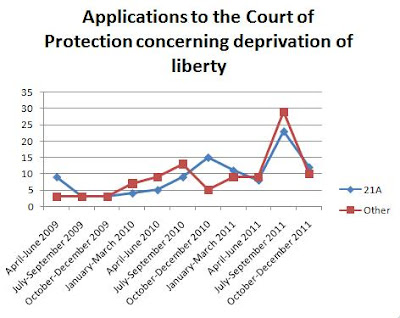 What is really striking in these figures is the enormous spike in applications to the Court of Protection in the quarter July-September 2011.  Although we will never know for certain, I speculate that this a result of the widely publicised ruling in Neary v Hillingdon (2011) shaking supervisory bodies into pro-actively take ongoing and irresolveable disputes to court.  Specifically, the finding in Neary that:


...there is an obligation on the State to ensure that a person deprived of liberty is not only entitled but enabled to have the lawfulness of his detention reviewed speedily by a court. [202]

Incidentally, the drop-off in the final quarter is only because the dataset is not complete (ie. we are only halfway through November...).

The data in full is given here: 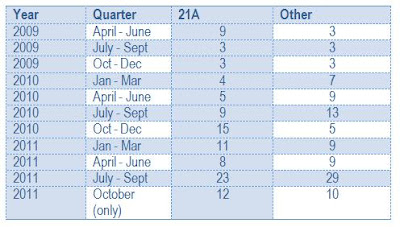 That's a total of 102 appeals under s21a in total since the DoLS began.  I'd love to know what the outcomes were...

The NHS Information Centre reported that by the end of the second year of operation there had been 8,982 completed DoLS assessments, of which 4,951 applications were granted.  Now, it's difficult to know how many of those might relate to the same person assessed more than once, but as a very rough ballpark figure, these data suggests that in the second year of the DoLS there were 40 s21a appeals for 4951 authorisations; that's an appeal rate of 0.8%, which is a slight increase on the first year, but still markedly lower than the 2.5% predicted by the impact assessment.  Excluded from this are DOLS cases referred to the court by the supervisory body, of course.  Even so, one might reasonably ask why everybody is getting their knickers in such a twist about the courts being flooded by applications given how low both the application and the appeal rates still are...  I suspect it's because the appeals aren't going to the Court of Protection itself, but the High Court, and this wasn't catered for in the impact assessment.  I suspect also that these cases are turning out to be more messy and complicated than anyone would have predicted, and taking up far more of the court's time.

I would have liked to calculate the appeal rate for the quarter following the Neary ruling, but unfortunately the latest DoLS dataset seems to be missing from the NHS Information Centre website.

Also, DoLS watchers should tune in to Radio 4's The Report this Thursday at 8pm for what looks set to be a very interesting program...
Posted by Lucy Series at 18:55