Mapping activity under the DoLS

Digital artist Carl Plant has made a fantastic map showing the number of deprivation of liberty authorisations under the safeguards.  I was bowled over by his skills and asked whether he might be able to a similar map using some data I had put together on the rates of application for each local authority, per capita of the population.  Carl kindly agreed and has said I can put both maps on the blog - but it's well worth visiting his blog for plenty more interesting data visualisations (including a UK map showing the educational divide, and a chart showing the rise in fuel prices).

The data are only from England (sorry Wales), and the data on deprivation of liberty authorisations and applications comes from the NHS Information Centre; I used population data from the Office of National Statistics (mid-2009) to work out the application rate per thousand for local authorities in England.


In different ways both charts are of interest.  I was interested in the rate of application data, because it shows that the huge degree of variance in activity of individual local authorities cannot be explained by population size alone. 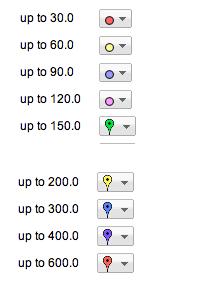 
To put the rates on this map into perspective, the Ministry of Justice originally predicted in their impact assessment that there would be 21,000 applications for deprivation of liberty in the first year.  This works out at an average rate of 0.39 applications per thousand people, which is roughly all the dots that aren't yellow.  This means that any of the red areas on this map are operating at, or below, the predicted average rate - but a few are operating at significantly more... 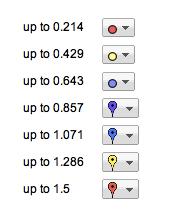 See the original map on Carl's blog.
Posted by Lucy Series at 09:46

Email ThisBlogThis!Share to TwitterShare to FacebookShare to Pinterest
Labels: deprivation of liberty safeguards