I've been umming and ah-ing whether to post about some data I have collected using the Freedom of Information Act about the funding status of people who are the subject of applications for authorisation to deprive them of their liberty in a care home.  The problem I have is that whilst the findings are potentially quite interesting, the quality of the data is a bit dubious.  What I'll do is tell you what the data shows, then suggest why it might be a cause of concern if it is a reliable indicator of the national picture - then I'll confess all my doubts about the quality of the data.
Privately funded care home residents are less likely to be the subject of the DoLS application

As part of a wider survey of all the local authorities in England*, I asked each of them the following question:


"Separately, for standalone standard applications and standard authorisation applications accompanied by an urgent authorisation, please indicate which authorizations related to people whose care was funded by the local authority and those where funding was provided by other sources (e.g. health funding, privately commissioned etc)."

Unsurprisingly, lots of local authorities applied the s12 FOIA exemption that supplying me with that information would exceed the appropriate limit - ie. it would cost them more than £450 of resources to supply me with an answer.  However, 81 supplied me with information about funding in some form or another.  Some of these (62) gave quite a detailed breakdown between the number of applications they received relating to people who were privately funded (either by themselves, their families or insurance), funded by the local authority, by 'health' ('PCT'/'Health'/'continuing care'), or jointly funded.  Some LA's gave this separately for standard and urgent applications, others gave the categories collapsed together.  To make the data more usable I collapsed the urgent/standard groups together and found 61% of applications related to local authority funded care home placements, 18% related to health funded placements, 11% related to privately funded placements, 4% were jointly funded by the NHS and the local authority and 6% were 'unknown'. 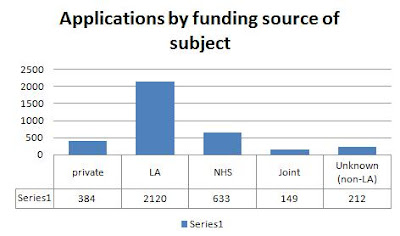 Does this match up with the proportion of people in care homes who are, in fact, being deprived of their liberty and are privately funded?  If it were the case that you are no more likely to be deprived of your liberty if you were privately or publicly funded, you would expect these proportions to match those of private and public care home placements nationally. According to the King's Fund 'Who Pays What?' (2006):

There is no reliable data for the total private expenditure on care home fees and selffunded domiciliary care, but the sums spent are substantial. Estimates put the proportion of care home places that are wholly privately funded at between one quarter and one-third.

So a proportion of 11% of all DoLS applications relating to privately funded care home residents is at least two and a half times lower than you would expect if the rate of people being deprived of their liberty were commensurate between them and publicly funded residents.  This suggests to me that either the basis for my assumption is incorrect - or greater numbers of people who are privately funded in care homes are deprived of their liberty without any lawful authority.
I think there are plausible explanations both ways.  It is possible that care homes catering to privately funded residents operate less restrictive regimes, that are less likely to amount to deprivation of liberty.  Factors such as staffing ratios, staff training, and access to the community may all be impacted upon by the wealth of the care home and the resident, and could all potentially impact on the degree of liberty enjoyed therein.  It is also possible that there is a common factor that means people who are more likely to be publicly funded are also more likely to need restrictions on their liberty in their own best interests.  It seems arguable that people who are jointly funded under s117 are more likely to require restrictive packages of after-care (although then I wonder if in those cases there are issues about eligibility for the DoLS v the Mental Health Act).  Qualifying for health or local authority funding you have to meet a pretty high threshold of need, and perhaps people with private sources of funding are opting to move into care homes earlier on - and so they are a more 'well' cohort, in need of fewer restrictions?
The other possibility, of course, is that care homes are just more likely to pick up on deprivation of liberty that is - or will be - occurring where a public authority is involved in arranging the care.  Commissioning PCT's and Local authorities will be be supervisory bodies, and so one would expect (hope) that they are aware of the need for authorisation for placements that may deprive someone of their liberty.  Meanwhile families or private parties commissioning care are highly unlikely to consider whether it might amount to a deprivation of liberty, and so it would entirely fall to the degree to which the care home is aware of their obligations under Schedule A1.  And as we know, care home managers' awareness and understanding of DoLS can vary enormously, and is generally said to be quite poor.
I'm not sure which explanation I prefer; it may be "a little from Column A, a little from Column B..."  I'd be really interested to hear your thoughts on this.  It does look from these data like there is a real possibility that people in privately arranged and funded care home placements may be at greater risk of unlawful, unauthorised deprivation of liberty.  Given that they may also lack fall into the possible gap in protection from the Human Rights Act 1998 that I discussed last time, they may be especially vulnerable to abuse of their Article 5(4) rights.
Problems with the quality of the data
As I said before, there are problems with the quality of the data I have relied upon for these figures.  When I added up the numbers for each response, they often varied significantly from the figures given by the respondent as the total number of applications they had received.  Where they were lower, sometimes they were closer to the NHS Information Centre data on the number of authorisations (rather than applications).  In some cases they were higher - in one case they were three times higher than the total number of applications they said they had received...  I'm not really sure what figures they sent then! I chose not to correct any of the figures from what they had sent as I couldn't be sure where the problem had arisen.  I took the decision on the basis that the proportions were likely to remain the same, even if they were giving me data on authorised cases, not just applications.  I also ran the analysis  excluding data that summed together was more or less than 20% away from the number of applications they said they had received, but the proportions barely changed.
Some local authorities (17) just gave me data on the proportion of DoLS applications that applied to local authority funded placements, and those that did not (ie. they collapsed together all those that were privately funded, with NHS and other sources of funding).  Those figures were even more striking, with 71% of all applications relating to placements funded by the local authority - potentially these also included jointly funded placements with health though.
More research needed!
I think it's pretty much obligatory for researchers to conclude by saying "more research is needed", to keep us in work and so forth.  Because of the problems I've just described, my data isn't robust enough to base any firm conclusions on.  If I could think of a way to get more reliable data from local authorities, I might attempt to survey them again next year, but I'm not sure how to avoid the problems I've had this time.  Perhaps to provide them with a table to complete?  The problem is it's hard to get data on the total number of residents in any funding category who aren't deprived of their liberty, and that's what you'd need for a proper contingency analysis.
And, as I've discussed before, there are two possible explanations for the pattern of results.  Either way it suggests that a person's wealth is a factor that interacts either with how likely they are to be deprived of their liberty, or how likely they are to be deprived of their liberty without lawful authority.  Either of those seem, to me, to be potentially a cause for concern.


*Except, embarrassingly, that I ommitted to ask 8 of them, mostly in the L's and W's of the alphabet for some reason.  Sorry to those local authorities.
Posted by Lucy Series at 17:57