Under the Mental Capacity Act 2005 deprivation of liberty safeguards (DoLS) an authorisation to detain a person is subject to a review process.  The DoLS are administered by supervisory body - these are local authorities, but in the past they were also PCTs (before these were abolished).  The supervisory body is responsible for authorising the detention in the first place.  They may also conduct a review at any time to ensure that the qualifying requirements for detention under the DoLS are still met.  The managing authority (the care home or hospital which the person is detained in) must request a review if it appears to them that the person may no longer meet the qualifying requirements for detention under the DoLS, or the reasons why they meet the qualifying requirements may have changed.  A review may also be requested by the relevant person themselves or their representative.


I wrote a while ago about why this review process was never intended to replace the independent review by the Court of Protection, as it is not a review by an independent judicial body but by the self-same body that authorised the detention in the first place.  Nevertheless, the review process can be very important for ensuring that the supervisory body monitors the relevant person's situation.  In some cases it might help to resolve issues or disputes - although, it cannot be a substitute for going to court if the relevant person remains detained and they, or their representative, are objecting to their detention.  The Health and Social Care Information Centre (HSCIC) collect data on the DoLS annually, including data on reviews, but they have not published the review data before.  I requested this data under the Freedom of Information Act 2000 and back in September they released to me the aggregate data on reviews, which showed that overall the number of reviews was pretty low in comparison to the number of authorisations, and that reviews were only very rarely triggered by the detainee or their representative.

The HSCIC have now released this data broken down by individual supervisory body (here).  I have matched the review data for local authorities to the number of authorisations, to look at how closely these are related to each other: 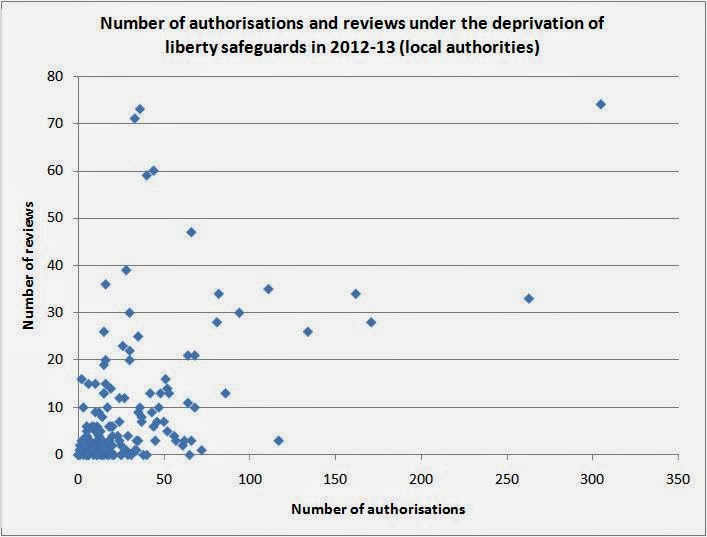 Given the general pattern variable use of the DoLS, it is hardly surprising to find a bit of a postcode lottery in relation to reviews, but what do these data actually mean?  Should supervisory bodies be aiming for high or low review rates?  Answering that question is not especially straightforward.  What we are, at base, interested in is making sure that a person's situation is regularly monitored to keep track of changes, and ensuring that a review is conducted whenever a person's situation changes.  The trouble is, the data don't allow us to pick into several important variables.

Likewise, it is hard to know whether we want to see a high rate of requests for reviews by the relevant person or their representative.  On the one hand, it is their right to request a review - and if it is being regularly exercised then that suggests that they are able to understand and exercise that right.  On the other hand, if the managing authority and the supervisory body are keeping on top of monitoring what is going on, then the relevant person and their representative should not need to request reviews themselves.

As ever with DoLS, it is very hard to dig beneath the data to see what exactly is going on.  What we can say is that supervisory bodies seem to be applying the review process in differing ways.  This may reflect the use of different strategies to monitor a person's situation (use of short term authorisations v regular reviews), or it may reflect individual differences in whether they are monitoring appropriately at all.
Posted by Lucy Series at 11:11