There have been a lot of changes over the last year at CQC.  Chief Executive Cynthia Bower has been replaced by former social worker David Behan, and Chair of the Board Jo Williams resigned last week.  Although there are likely to be bumps in the road in the near future - notably the registration of 8,500 GP practices and the findings of the Mid Staffordshire NHS Foundation Trust Public Inquiry in October - some detect change in the air, a regulator turning over a new leaf.  CQC are currently consulting on their strategy for 2013-16, and one source of contention is likely to be the tricky matter of inspection frequency.  I have previously written about the shift towards 'risk responsive regulation', an idea emerging from the Hampton Report and which resulted in the removal of a requirement for biannual inspections in care services in around 2007.  Under CQC there is no statutory inspection frequency, but last year in interviews amid the fallout from Winterbourne View and uncomfortable witness testimony at the Mid Staffordshire Inquiry Cynthia Bower appeared to commit the CQC to doubling inspection frequency, perhaps to annual inspections (e.g. Community Care, HSJ).  In 2010/11, inspection frequencies sank to an all time low - including, according to data CQC shared with me, an inspection rate of only 6% for learning disability services.  However, CQC recently shared with me updated, data, shown in the graphs below, which shows that in 2011/12 they have worked extremely hard to increase inspection frequencies, with around 72% of all residential care services being inspected that year.  This is really encouraging, the charts below speak for themselves of the effort that must have gone into increasing the volume of inspections.  However, in CQC's recent strategy consultation and statements from David Behan, there are ominous signs of a U-Turn back towards risk based regulation - that is to say, removal or reduction of minimum inspection frequency targets, based on risk.

The charts below show how inspection frequencies have changed over the last decade.  The data for 2010/11 are a little confusing, as I've been sent different figures in different responses which I think relate to CQC inspecting under the Care Standards Act 2000 (CSA) and Health and Social Care Act 2008 (HSCA) concurrently: 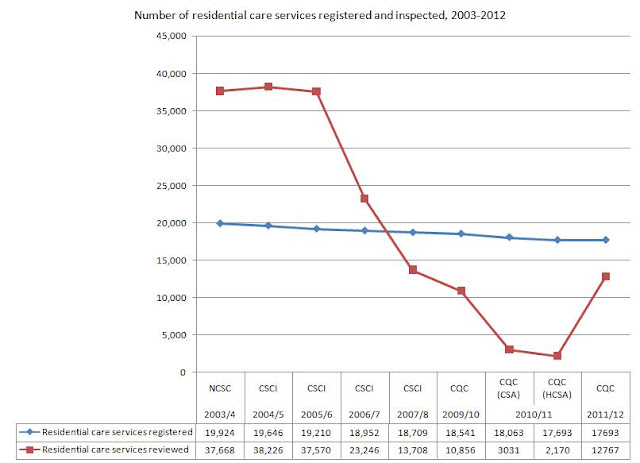 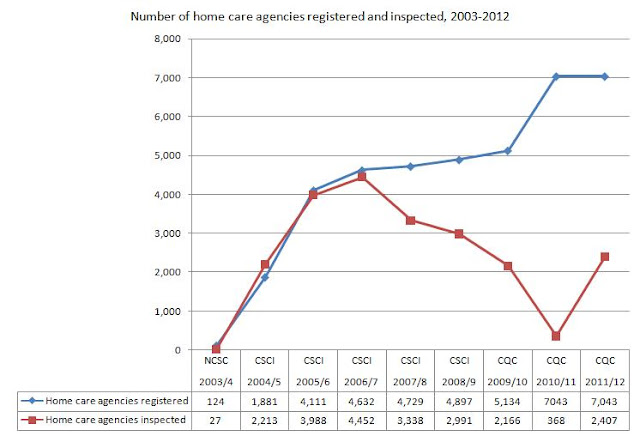 I have written a response to the CQC's consultation on strategy, which I've posted here.  To summarise my response, I have argued:

This was my conclusion:


CQC has been placed by the government in an extremely uncomfortable position; its resourcing is simply not commensurate with its remit. Casting back to my question at the outset, which the CQC must keep in mind when developing its strategy for 2013-16, I can think of no other means by which a person who had few private or professional visitors, who was reliant upon care staff to access all forms of communication with the outside world, could communicate to others that their human rights were at risk other than through CQC visitation. Clearly the social isolation of care service users is a factor in their vulnerability that others should be taking steps to address, but given that this is the reality for many older people and people with learning disabilities using care services, the CQC must keep their situation firmly in mind. In my view, this means – at a minimum – an annual inspection with a methodology tailored towards their specialist communication needs.  If CQC is unable to deliver this within the resources available to it, it would strike me as more honest, and more politically astute if CQC is to avoid being scapegoated for the abuse scandals will certainly continue to arise without adequate safeguards, if they are clear with the public about the reasons why and the risks this carries. It is not because ‘risk responsive’ regulation can deliver efficiencies and cut waste; cutting inspections is not cutting waste – it is cutting out the only access CQC have to information from the most vulnerable service users who have difficulties communicating concerns through other channels. CQC should be clear that if they are cutting inspection frequencies or – more accurately – not striving to increase them, it is because an inadequate settlement from the government itself has forced it to prioritise, and that will carry increased risks to service users which CQC is unable to mitigate.