Just a quick one to draw your attention to the two latest official reports on the deprivation of liberty safeguards (DoLS).

The first is the third annual report on the DoLS, published by the NHS Information Centre. The report indicates that DoLS applications continued their year on year rise in the third year, contrary to the predictions of the impact assessment. The impact assessment predicted that the number of authorisations would fall year on year, but that was predicated on the assumption that the DoLS would be applied to 21,000 people in the first year - when in reality there were only 7,157. Even in their third year, there were only 11,393 applications. 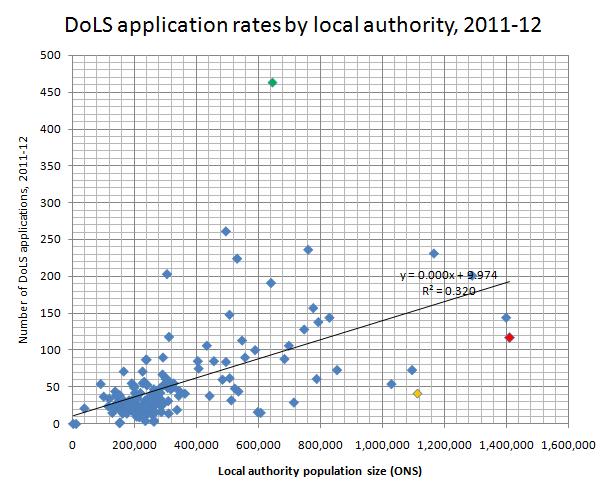 To give you a sense of the scale of these differences, if Leicestershire's application rate (in green) were extrapolated out to the whole of England, we'd be seeing 37,200 applications per year (which doesn't seem preposterous when we consider initial estimates in the Bournewood Consultation were for 100,000 people).  If Reading's was, we'd see 341 applications per year.

But the report showed something else of interest - that the number of applications fell for the first time between December 2011-March 2012. Could this be the effect of the ruling in Cheshire West & Chester Council v P? It would be particularly interesting to see if the number of court appeals under the DoLS also fell during this time. My guess is that they won't - the kinds of cases excluded by Cheshire were those where there was no dispute over where a person lives, not the kinds of cases that typically result in a s21A MCA appeal.  Incidentally, it's been officially confirmed this week that permission to appeal has been granted by the Supreme Court to both Cheshire and P & Q, and their appeals will be joined together. Three cheers to the Official Solicitor for pursuing this one - I'm sure everybody in the field would welcome greater clarity, even if in the end they don't welcome the result. It's a shame that it took so long for these cases to get to this point, but on the other hand it has given the European Court of Human Rights time to pop out two rather helpful judgments (Stanev v Bulgaria, and DD v Lithuania).

The other report on DoLS published this week was the Department of Health's post-legislative scrutiny of the Mental Health Act 2007 - including the DoLS. If you were feeling cynical, you could play spot the difference between this report and the reports of the Mental Health Alliance on DoLS (2010, and 2012).

The report acknowledges that 'The definition of a ‘Deprivation of Liberty’ has also been an issue of some debate' and then comments 'The Code does however offer guidance; it cautions to distinguish between deprivation and restriction, and it summarises some case law on this issue', suggesting the DH are completely out of touch with how vague and out of date the guidance in the code is. And how appallingly contradictory the case law has been. The report also acknowledges the criticism that 'there may be a conflict of interest inherent in the system as Supervisory Bodies and Best Interests Assessors are often part of the same team', but says 'The Department considers they can be managed effectively within one organisation'.

On the issue that the safeguards do not apply in settings other than care homes and hospitals, the DH notes that authorisation can be sought from the Court of Protection and then says, rather inscrutably, 'This is a different approach to reflect the different circumstances in which people live.' So, that clear and careful reasoning clears up why local authorities must shell out a fortune to authorise in those settings then, and why people who are de facto detained there have few accessible ways to trigger Article 5 safeguards. Almost as clear and careful as their reasoning not to apply the DoLS to these settings in the first place.

Several commentators - including myself and the Mental Health Alliance - have questioned whether the DoLS provide an Article 5 compliant route of appeal. On their reasoning in relation to this the DH surpass themselves:


'..the courts have not declared any of these systems to be incompatible with the European Convention on Human Rights.'

Doh!! It is true that courts can make a declaration of incompatibility with the ECHR, but they're hardly likely to find that the DoLS don't provide an accessible route of appeal in the less than 1% of DoLS authorisations that actually end up in the courts! In those cases, self-evidently, the DoLS have worked (although, even then, it can take a lot longer than might be desirable). And what was it Mr Justice Jackson said in C v Blackburn with Darwen? Oh yes:


It is a truly unhappy state of affairs that the law governing the fundamental rights and welfare of incapacitated people should be so complex. As this case shows, its intricacies challenge the understanding of professionals working in the field and are completely inaccessible to those for whose benefit the legislation has been devised, including those with a relatively high level of understanding, such as Mr C.

Sounds like a ringing endorsement from the courts, doesn't it?
Posted by Lucy Series at 11:01